The Focke-Wulf Ta 154 Moskito was a fast twin-engined German night fighter aircraft designed by Kurt Tank and produced by Focke-Wulf during late World War II. Only a few were produced, proving to have less impressive performance than the prototypes.

The first armed example of the Ta 154 was the V3 prototype, which was also the first to fit the Jumo 211R engines. The added weight of the guns and drag of the 32-dipole element Matratze radar antennas used on its UHF-band FuG 212 C-1 Lichtenstein radar unit slowed the aircraft by a full 75 km/h, although it was still somewhat faster than the He 219. The rest of the 15 prototypes were then delivered as A-0 models, identical to the V3. Some of these also included a raised canopy for better vision to the rear. 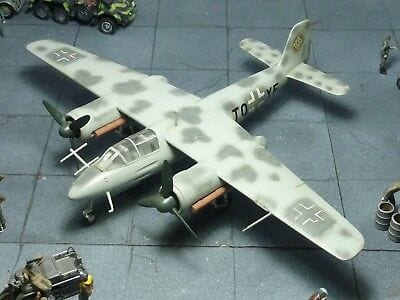