The PZL.37 Łoś (moose) was a Polish twin-engined medium bomber designed and manufactured by national aircraft company PZL. It is also known as "PZL P-37" or "PZL P.37", but the letter "P" was generally reserved for fighters of Zygmunt Puławski's design (such as the PZL P.11).

Upon its introduction to service, it was popularly considered to be not only the most modern and effective weapon then possessed by Poland, but also to be one of the most advanced bombers then operational in the world. From mid-1938 onwards, there was huge interest expressed by various nations in potential export sales of the PZL.37; in response to this highly favourable reception, PZL, being keen to meet the demands, developed additional variants that were intended for the export market, such as the PZL.37C (which was to be powered by a pair of Gnome-Rhone 14N-0/1 radial engines). An improved enlarged derivative, known as the PZL.49 Miś, was also developed for the Polish Air Force.

The Łoś was extensively used in the defense of Poland during the rapid invasion of Poland by Nazi Germany in September 1939. On 1 September 1939, the Polish Air Force had roughly 86 PZL.37s in total, but less than a half of those actually saw active combat use due to aircraft being used by training units, being in maintenance, or having been held in reserve. The bombers suffered from a high attrition rate due to lack of fighter protection, and the final Polish combat missions were performed on 19 September. During October 1940, around 26-27 of the PZL.37s that had been evacuated from Poland were seized by the Romanian government and 23 of these aircraft were subsequently used by the Royal Romanian Air Force, including offensive missions against the Soviet Union.

PZL.37Abis
Batch of 19 serial aircraft of A version with double tail fins. 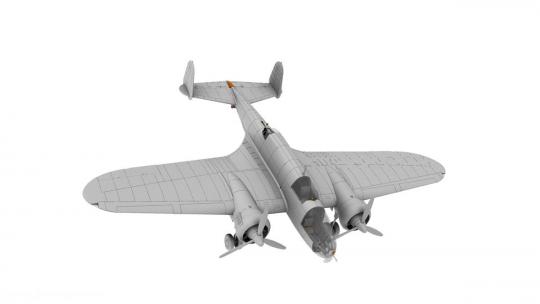