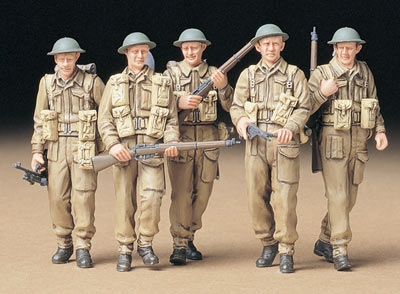 This is a 1/35 scale set of five British infantrymen which includes a squad leader, an ammunition loader, and riflemen who are cautiously carrying out a patrol. Set includes each squad member depicted in natural poses with realistic expressions. Accessories such as the Sten sub machine gun, Bren light machine gun, Enfield rifles, havasacks, and back packs all have a fine finish. Combining this set with other 1/35 MM Series models such as Cromwell Mk.IV British Cruiser Tank Mk.VIII (Item 35221) for a larger diorama would be enjoyable to display.